Dear users of our project, reached my hands up another utility from a reputable Ratiborus, this time in front of Office 2016 or Office 2013 Install you. I think many of you have already guessed that this program is … All right, it will allow you the most comfortable to hold the installation of Microsoft Office 2016 version.

The first thing to note, the program is portable, it can be recorded on a USB drive and then run on another computer, and now how to download and install Office 2016 to simplify. After start-up, will be a small window with two tabs, we are interested first in front of you. You have to choose the components you want to install. 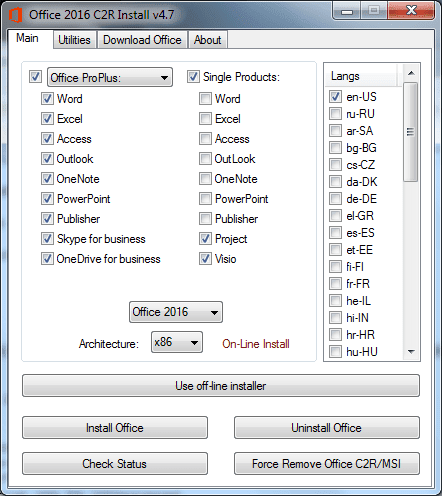 Initially, ticks are everywhere, if you are satisfied, select the word length, language and click Install Office button, the process is running, you have to have patience. If you need to select the components, say you are only interested in the Excel and Word, then removes the remaining checkboxes, everything is logical.

Total at your disposal four buttons, Install Office and Uninstall respectively, goes on Check Status and Force Remove Office 2016. Particularly add nothing more to the button, I think to use the program without problems, everything is clear. The archive is a small text file if you open it, see the instructions for installation and activation: “If you have installed of Office, then click” Force Remove Office 2016 “, then it is necessary to reboot the system, reinstall of Office, run the following one by one and then close Word, Project, and the Visio, while key input is not necessary, even if you strongly will ask. after that you need to run KMSAuto Net 2015 press there Activate of Office, after we offered to convert Office RETAIL in the VL, you need to accept and carry out the process further activation should be continued. Now all good luck! ”